And another simply gorgeous day in Florence!  We all hit the street running at about the same time, but heading in different directions.  My first stop was Piazza Santa Spirito.  I was hoping to get a look inside some of the shops in hopes of watching local artisans at work. Something I had really been looking forward to doing on this trip. I passed by but one Cobbler.  Oh, and I really didn’t look as bad as I thought I would after my ‘little tumble’ yesterday. I mean, it could have been much worse! 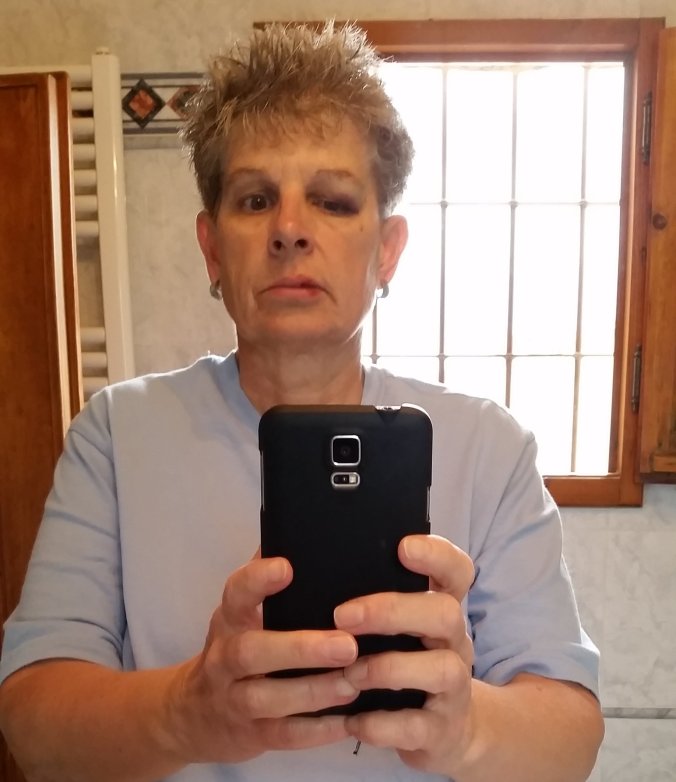 Once I reached the Piazza I immediately saw the Palazzo Guadagni where I had originally made a reservation for myself.  As long as I was here I thought I might as well check it out for a return trip to Florence.  Unfortunately, I wasn’t able to actually get inside other than the lobby area.  The location however was great, right on the Piazza.  I wandered around the different vendors, much like a flea market here in the US, but there were a few selling fruits and vegetables.  I went inside Basilica Santo Spirito and it was just gorgeous.  It just amazes me each time how nondescript many churches can be from the outside, and then when you walk in they are astonishingly beautiful! Photos were not allowed however, I took one through the front door.  It looked like a courtyard inside the church, you think you are outside. Very interesting.

Outside of the Basillica 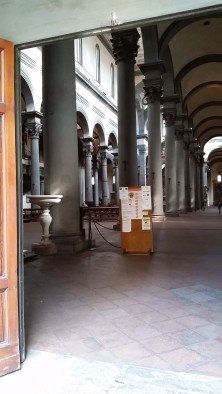 Looking through the front door of Basilica Santo Spirito

Within short order I ran into the Boys and after much discussion we decided to go to Piazzale Michelangelo with Dennie leading the way to the bus stop. It was a beautiful ride up to the Piazzale and the views were astonishing from up there. It was picture postcard beautiful as they say. Had I not been seeing it all for myself, I would not have believed it to be real.  You could see up into the Tuscan hillside and neighboring villages off in the distance. Absolutely breathtaking.  It was extremely difficult to choose just a few photos to post, so forgive me if I chose too many. 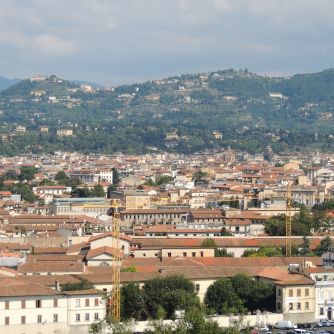 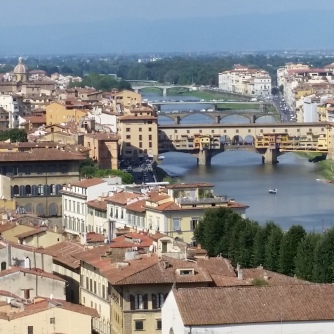 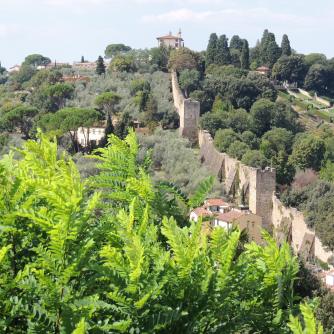 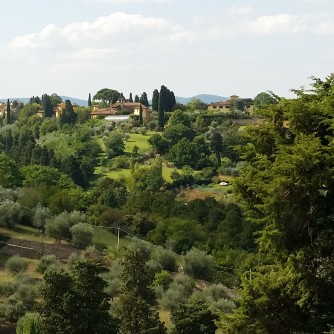 Once Dennie and I had our fill of taking photographs over an hour later, we hopped back on the bus. I had wanted to explore the Oltrarno more but I neglected to get off the bus when it stopped there.  Instead, I rode back to Santa Maria Novella Train station with the guys. I walked back from there and I will admit, I did a complete circle and ended up right back at the train station! I knew that I would come to a fork where 3 streets met, but could not for the life of me, remember which fork was the right one. Ultimately, I took a very long detour, but since I like to walk, it was OK, other than the time I wasted. This was the first, and only time, I took a wrong turn during our 2 week trip. I am not counting getting on the bus and going the wrong way ha ha.

Since I had not eaten anything yet today I grabbed a quick sandwich of Arugula, zucchini, mortadella and mozzarella on focaccia bread. 1.5 € -these kinds of small sandwiches are more than enough if you want a quick bite to eat. Panino are also quite commonly found in these shops and are also reasonably priced.
Eventually I made it back to the Oltrarno and took a walk over to the Palazzo Pitti. In front of the Palazzo Pitti is a large, sloped stone area that people stop to enjoy much like a small park.  The fact that they are stone, not grass, is quite intriguing.  I have seen photos of Siena, and it is the same thing there. It just does not look comfortable at all, but obviously is not unusual at all to Italians.

Part of the Palazzo Pitti

Looking from Palazzo Pitti toward the Oltrarno

I took another walk over the Ponte Vecchio and it was much less crowded since it was late in the afternoon.

I met up with the Boys later for dinner and we chose Ristorante Ricchi Pizzeria, eating outside on Piazza di Santo Spirito. It was a beautiful evening to spend dining outside for our last evening in Florence.  2 more first food items for me, I always like to try something I have never had before on each trip I take. I had Smoked Scamorza to start and Parppardella with ragu of Wild Boar – it was excellent!!  It was not gamey tasting at all, it tasted like a rich piece of beef.  The Smoked Scamorza was wrapped in Prosciutto on a bed of arugula.  Arugula is something that I had a lot of while in Italy as well as radicchio. I love arugula and wish it were available for a longer period of time here at home.  Radicchio is something I have been wanting to try so now I know that I like it!  The Prosciutto on the pizza at lunch yesterday was much better, this was much more salty than I like. 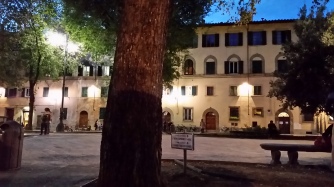 Parppardella with ragu of Wild Boar 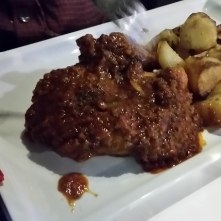 This was the last day in Florence and I am upset that I had not seen but one local Artisan at work. Obviously I didn’t walk down the right streets, or maybe because of looking down at where I’m walking all the time, I just plain missed them. I realize more and more how much I miss because of my need to look at the ground and it irritates the hell out of me. I am going to have to start forcing myself to just stop, step off to the side, look up and down the street to see what lies ahead and head in that direction. Despite my loving to walk everywhere I visit, I still find myself walking to something too often. I am on a mission and miss too much along the way. I am a bit more conscious of this in my last few trips, but I need to do a better job of concentrating on not being on a mission. Each day in Florence I made the comment that we should have spent more time in Florence and less in Rome, for my tastes anyway.

Photos of us at Piazzale Michelangelo 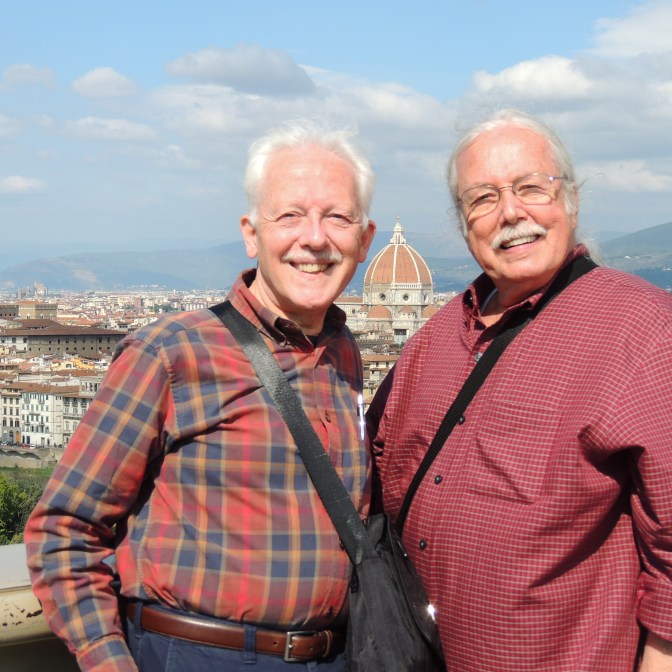 I enjoyed Florence a whole lot more than Rome to be sure.  I am realizing that what I didn’t like about Rome was that it seemed to be a city of ‘gotta go here, gotta go there, gotta see this, gotta see that’. While there are crowds in Florence, especially around the Duomo  to be sure,  unlike Rome, the City Center is a Pedestrian only area making it much more enjoyable.  Make no mistake, there are plenty of things to see while in Florence.  The ambiance of the city itself was just so much more relaxed, more accessible, more compact and easier to get around.  Other than when lugging suitcases, or heading further out of the City Center and Oltrarno you really can walk everywhere.

Rooftop views from our apartment.  I just love the juxtaposition of the old and new on the roofs in Italy.  Satellite dishes on roofs that may be almost 2000 years old? Whodathunk it? 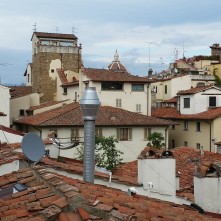 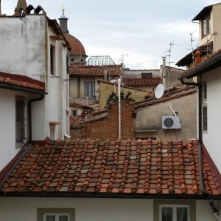 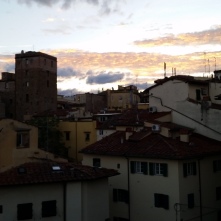 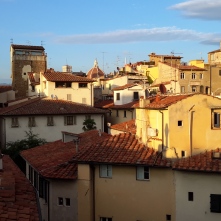 Street scenes around the Oltrarno – 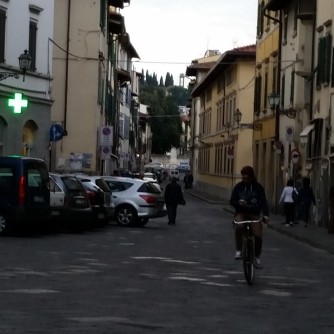 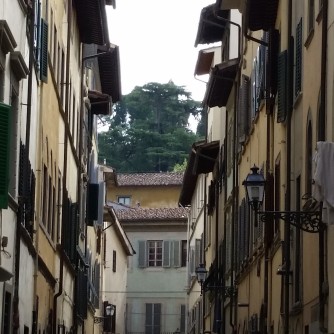 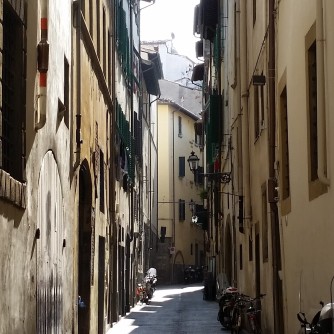 I think you can see why I enjoyed Florence and especially the Oltrarno area so much. I know that I’ll be back for a longer stay. There is much left for me to explore.

As always, I would love any feedback you may have. Your experiences, likes, dislikes. Did you enjoy Florence?  Did you find it as inviting as I did?

And now, at last, I can begin writing about Venice – I hope you’ll join me as my adventure and long time dream, plays out.